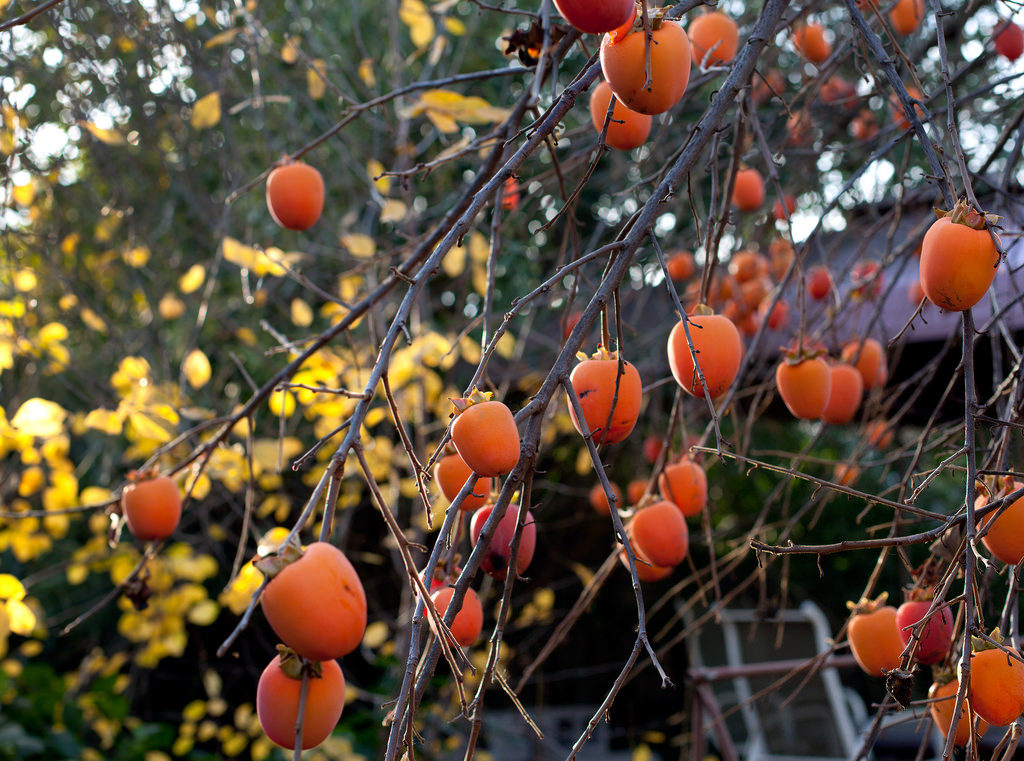 The first persimmons in the United States were grown in Virginia, but this sour fruit failed to satisfy the early colonists. A couple centuries later in the mid 19th century, Commodore Matthew Perry was sent by a fledgling US to engage in diplomacy with a secretive Japan. There, he tasted the sweeter Japanese persimmons.

By the end of the 19th century, these variations of the persimmon flooded into the US, especially to California, where the delicious fruits found not only a receptive audience, but also the ideal climates for growth.

The Japanese persimmon Hachiya tree, or Diospyros kaki ‘Hachiya’, is a deciduous tree native to Japan, China, Korea, Myanmar, and Nepal. The tree grows up to 60 feet, or about 5 stories tall.

The fruits produced by these flowers are the main draw of the species. With many variations of the tree, the Hachiya persimmons are distinctly acorn shaped and are astringent when unripe, with high levels of tannins that make the taste nearly unbearable, akin to a green banana.

As the tough, unripe Hachiya persimmons ripen, the opaque, orange skin becomes more translucent and the fruit itself becomes extremely soft to the touch and requires gentle handling.

The ripe fruit tastes like a cross between cinnamon and an apricot, and is highly valued for its flavor. Although the Hachiya persimmons take nearly a week to ripen, mature fruits can be ripened quicker if placed in a brown bag with pears or bananas, which release a compound called ethylene. Ethylene is a plant hormone that promotes ripening of fruits.

Along with being well liked for its taste, the fruit is a great source of vitamins A and C, low in fat and high in fiber. Finally, more research is being done into the antioxidant properties of the fruit, since persimmons contain beta carotene and lycopene, the latter of which has been studied as a potential combatant against cervical and breast cancer.

There is tremendous history behind the cultivation of persimmon trees, especially in Asia. While the Japanese are most well-known for their persimmon trees, owing to the fact that they developed the most delicious and widespread varieties, the Hachiya persimmon trees have actually been cultivated the longest in China, with cultivation going back nearly 2,000 years. Throughout China, the fruits are said to be helpful against stomach ailments, diarrhea, and fever, highlighting how essential the fruit has become to their culture.

Even European cultures treasure the fruit, with the genus name Diospyrus meaning “divine fruit” or the more literal “Wheat of Zeus” in Greek. In its native environments, the tree is valued for their longevity, providing shade, serving as a niche for birds, and resistance against pests.

Stemming from this great deal of cultural association in China and Japan, the latter of which has made the Diospyros kaki its national fruit, the tree has spread across the world, becoming the most widely cultivated species of the genus.