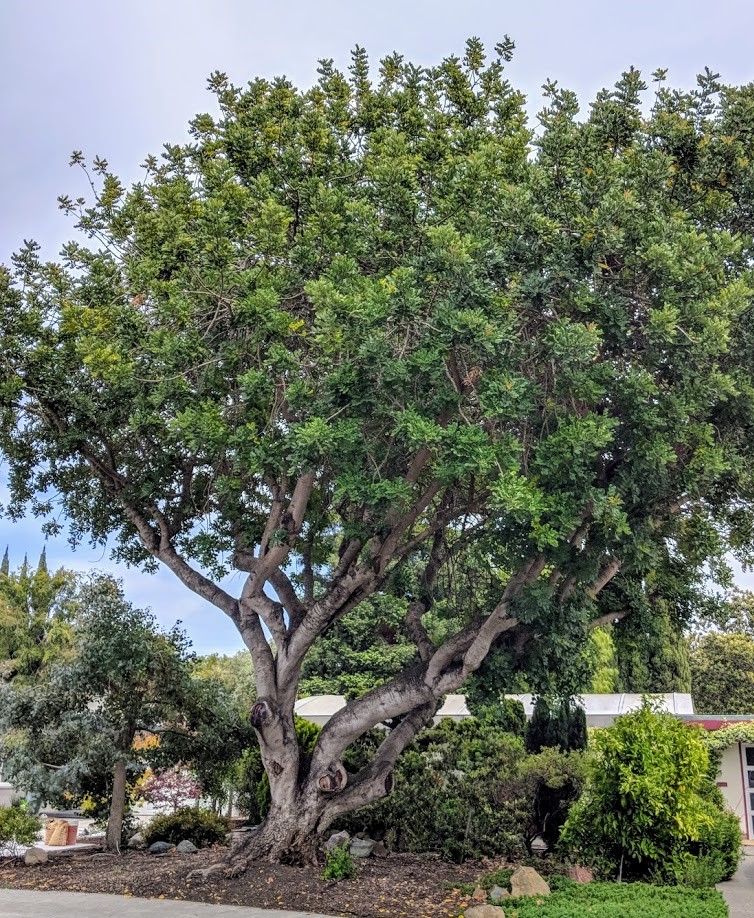 The carob tree (Ceratonia siliqua) is a member of the pea family native to the Mediterranean region. It is most known for the large bean pods and seeds within them. The name carob comes from the arabic خَرُّوبٌ (kharrūb) meaning “locust bean pod” (the pods somewhat resemble locusts).

This tree has been naturalized in the west and thrives in the California climate. It is cultivated extensively in agriculture, but is still found in the wild in the Mediterranean. Carob trees are mostly dioecious, meaning they have distinct male and female forms. Female trees are grown ornamentally and cultivated for their fruit—a six-inch-long brown pod.

Carob seeds contain a sugar called galactomannan, which is used to make locust bean gum. Locust bean gum is commonly used as a food additive to thicken foods like ice cream and salad dressing. The bean pod itself is dried and used in chip or powder form as a low-sugar substitute for chocolate.

Chocolate contains theobromine and caffeine, which are both toxic to dogs. Since carob lacks both compounds, it is used to give a chocolate flavor to pet foods.

Carob is also a good food substitute for people with diabetes. In traditional Indian medicine, extracts of the leaves from the great bougainvillea (Bougainvillea spectabilis) were known to heal diabetes. The compound D-pinitol, a type of sugar, was eventually extracted from the bougainvillea and proven to decrease blood sugar levels. Carob pods also contain D-pinitol, which make it an ideal replacement for chocolate in food. Carob is also known to help treat many other conditions like diarrhea and hyperlipidemia (high fat concentration in blood).

The tree has been culturally and economically significant for thousands of years. Carob bean pods were eaten in Mesopotamian culture and the carob tree was referenced in “The Epic of Gilgamesh”, the earliest existing work of literature. A carob bean pod is depicted in the ancient Egyptian hieroglyph meaning “sweet”.

Additionally, the term “carat” originates from the Middle Eastern practice of weighing precious gemstones against carob seeds as a measure of purity. A solid gold Roman coin known as the solidus weighed as much as 24 carob seeds, leading to 24-carat gold being the purest form of gold.